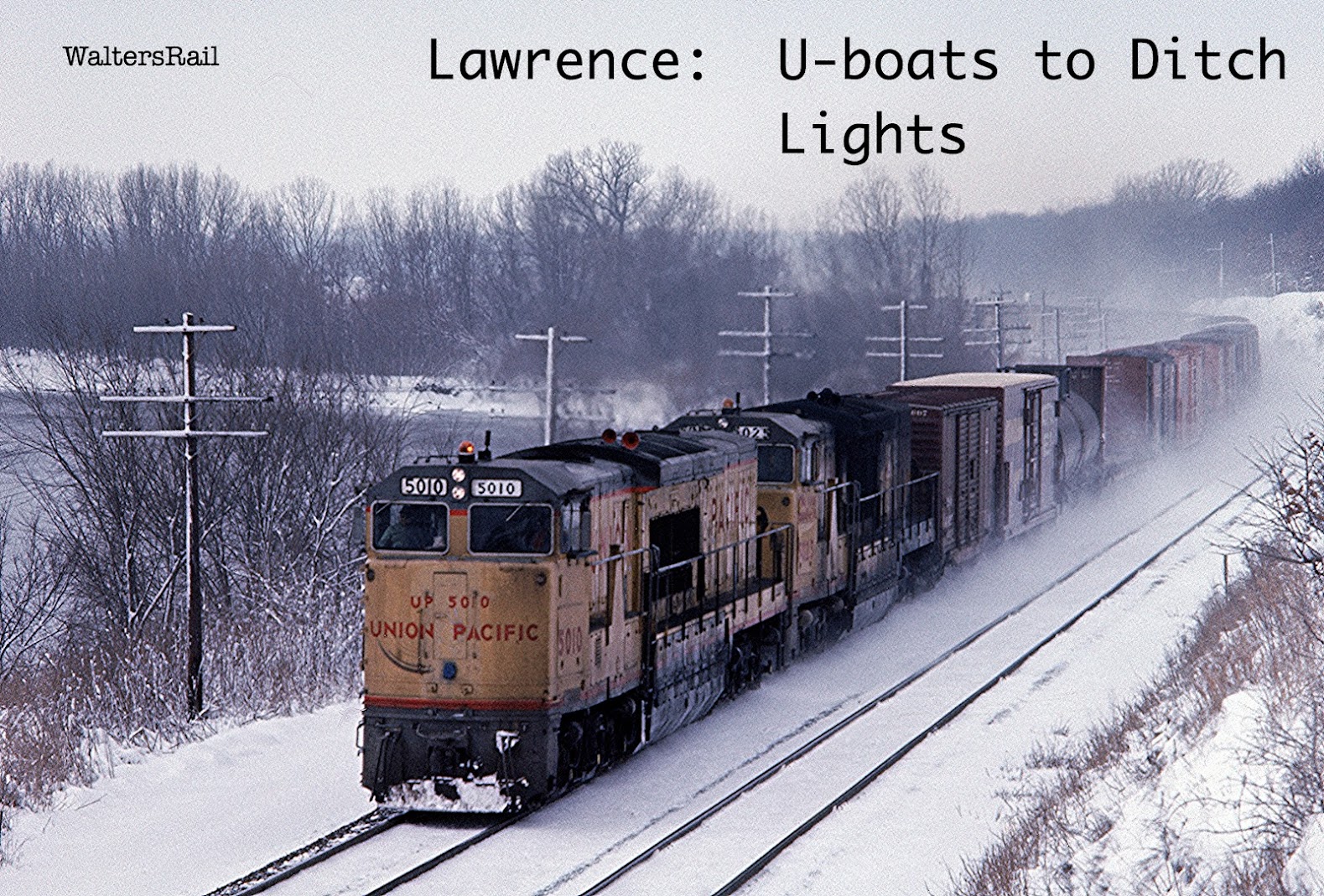 When my friend Carl Graves was an active railfan, I would from time-to-time drive from my home in Oklahoma to his in Lawrence, Kansas, where we would spend a few days drinking beer, looking at slides and taking photos along a short section of Union Pacific's Marysville Subdivision in and around town.  Lawrence is home to the University of Kansas and was, during the "Bleeding Kansas" era, a bastion of anti-slavery.  A free state, Kansas was the center of many violent confrontations, including perhaps the best-known raid in 1863 of Confederate guerrilla William Quantrill, who burned Lawrence to the ground.  Anti-slavery Kansans called "Jayhawkers" soon retaliated, and the rest, as they say, is history.

Like a train whistle's echoing between mountain ridges, the actions of long-ago still ring today in Lawrence through Free State High School (where my wife's niece teaches Art) and the Free State Brewing Company (where Carl and I once spent way too much time).  The university's sports teams are called the Jayhawks, and even residents whose knowledge of the Great American Conflict is as shallow as a child's wading pool seem somehow to realize that Lawrence was and is a special place.

What follows are images taken along the Marysville Subdivision in and around Lawrence, Kansas, from 1973 through Carl's retirement from railfanning in the early 21st century, during which (1) the double-track line went from Automatic Block Signal to Centralized Traffic Control, (2) the Rock Island, which shared the line from Kansas City to Topeka, disappeared like smoke from a distant automobile accident and (3) motive power evolved from monstrous General Electric U-boats spewing oil to equally monstrous alternating current engines with ditch lights.

Some of my earliest images were taken in Lawrence in the summer of 1973, shortly after college graduation.  To put it mildly, I knew little about cameras and film, like a tenor who cannot read music.  The following photographs were taken with GAF slide film rated ASA 400!  The grain looks as big as pea gravel.  Today, GAF manufactures shingles and other roofing materials.  For a brief and completely unsuccessful moment, as brief as the instant between the traffic light's turning green and the vehicle honking behind you, the company challenged Kodak in the slide film market.  I may have the only GAF slides still existing in the world.

One year later, I had deserted GAF slide film, or perhaps the film had deserted me.  I no longer remember if the film was still sold that year.  In any event, like someone changing brands of whiskey, I had switched to Kodak, both Kodachrome and Ecktachrome.  My friends told me not to shoot Ecktachrome because, "the dye will fade in about ten years."  Well, these slides are now about 50 years old and haven't faded yet, though I have.  I challenge you to distinguish Kodachrome from Ecktachrome in the following images.

In 1976, your author began law school -- a long slog through knee-keep mud that seemed to end back where it had started, as though I had spent the prime of my life going nowhere, like a dog's chasing its tail or a model train on a circular track.  There were no visits to Lawrence, and virtually no railfanning until after I had passed the Bar Exam and completed a few years' work.  Only then did I feel confident enough to take time off.  (You may think that I'm exaggerating, but I'm not.)

Also, during that period, Carl was out of state obtaining a Ph.D. in Labor History from Harvard.  So there was no one to visit in Lawrence anyway.  By 1981 he and his wife had returned.  (At least he had spent those years doing something useful.)

In the seven years since my last visit, the Marysville Sub was both the same and different.  Both tracks were still controlled by automatic block signals, but the U50's and U50C's were gone.  Traffic was as heavy as ever, perhaps even heavier, but the Rock Island was also gone, having shut down for good on March 31, 1980.  I spent only a couple of afternoons along the tracks in 1981 and present here a few of the better images.

The calendar moves forward to 1990.  Your author will turn 40 in November and has been practicing law 11 years.  His son is six years old and alternately unintentionally humorous and intentionally infuriating.  Ditch lights are almost a decade away, but the first "safety cabs" appeared in 1989.  Although coal traffic has increased dramatically, the railroad is still dominated by manifests.  The flood of intermodal traffic, well underway on AT&SF's Transcon, is still a trickle in northeastern Kansas.

Probably the biggest change on this section of the Union Pacific is the age of the photographer.  He is no longer enthusiastic about waking before dawn and reaching the tracks as the summer sun rises.  He no longer bothers with summer photographs taken during the middle of the day.  He has begun the occasional use of a tripod for any lens longer than 50 millimeters, though he still prefers to "hand hold" his 135.  The consistent use of zoom lenses must wait until the 21st century.

In all of the images above, the westbound track through Lawrence was jointed rail.  This vestige of 19th century railroading has now disappeared.  The railroad industry, almost against its will, is starting to modernize, though the process is as slow and painful as the removal of a wisdom tooth.

In 1995, the Marysville Sub in and around Lawrence was still controlled by Automatic Block Signals.  Everything west of Topeka had long been Centralized Traffic Control; the same for the area closer to Kansas City.  But in Lawrence, trains were still limited to right-hand running with no centrally controlled cross-overs.

The images in this section were taken on a single afternoon in 1995, when eastbound traffic was stopped because of a traffic accident on the eastbound track in Lawrence.  The opposite track was still open, but there was no way to route the trains for left-hand running, so everything eastbound just sat there, quietly, as though each engine had run out of fuel at the same time.  Some crews went dead on the law, turned their headlights off and went home.

I doubt that this single event caused the UP to convert the line through Lawrence to CTC, but it may have been the last straw.

Ditch lights appeared courtesy of federal regulations.  Since I favor limited government (i.e., none where none is needed), I was initially non-plussed.  After a few photographs, I quickly changed by mind.  When shot head-on, ditch lights dramatized my images, especially those taken with long lenses.  In some cases, the effect was subtle; in others, startling.  My overall impression was that ditch lights, like bacon, made everything better.

I am quite certain that the government was not thinking of me when it mandated ditch lights.  Still, you take your pleasures where you find them.  So a tip of the hat to those federal bureaucrats who inadvertently injected a highlight into an otherwise gray world.

In addition to ditch lights, UP power in this era began to sport eagle wings on the nose.  This touch, combined with ditch lights, made these engines quite photogenic, in no small measure because they were clean.  No road grime in those days.

At the beginning of the 21st century, the Marysville Sub through Lawrence also converted to Centralized Traffic Control.  Your author does not know the exact date, so for enlightenment, he queried his friend Carl, who responded by email:

In the late 1990s the last remnants of ABS and center sidings were replaced with CTC and high-speed crossovers in the Kansas City-Topeka territory. The line west of Topeka to Marysville had been CTC for some years. The last ABS was a 28-mile stretch between Grantville (MP 61.5) and East Lawrence. I don't have an exact date but I am guessing it was all CTC by 2000.

And so we arrive at your author's most recent images from Lawrence -- taken 14 years before this post of May 2022.  I have no idea what the railroad looks like now, nor do I have a good idea of what it looked like then, save for the images below.  At certain moments, my life seems compressed into a single point, an undifferentiated singularly, if you will, and I cannot distinguish one date from another, 1974 from 2008 from 2022, as though I have lived them all simultaneously.  The images contained herein tell me differently, because they are date-stamped, and date stamps don't lie, do they?

These images tell me that in 2008 the Marysville Sub through Lawrence, Kansas, is crawling with coal trains, day and night, round the clock, 24/7, with no pause, no respite, no moment to clear one's thoughts.  The endless parade grows monotonous, like Irish folk music.  The Union Pacific has made the transformation to the 21st century; the old railroad indices are gone, as are the old railroad men, as progress charges forward.

I end with something not even remotely connected to railroads.  Unless you enjoy speculating about things that don't effect your life at all, you may want to stop here.

At the speed of light, time stops and distance ahead shrinks to zero -- an undifferentiated point where there is no past, no future, no distance, no duration, all of which we experience because we are subluminal.  We do not move at the speed of light.  If we did, mass would increase infinitely, an impossibility.  We are trapped in a world of past and future and feel that time flows past us.  But it does not.  Our existence is like a book.  We read it page after page, but the book is already complete.  We cannot experience it all at once.  Nor, alas, can we go back and read it again.  That is not the book's fault.  It is ours.

To see my photographs on Flickr, go to https://www.flickr.com/photos/jpwalters/.