In April 2015, my friend Dale Jacobson from Maryland came to visit for a week.  Dale is interested in short lines and obscure railroads, and my home state of Oklahoma satisfies his longings in certain small respects.
Dale and I first met in 1971 when he was stationed at Tinker Air Force Base in Oklahoma City, and I was on summer break after my second year of college.  Since then we have corresponded and visited each other from time to time.  I think Dale finds my libertarian viewpoint oddly stimulating, like a mammal with paddles for feet or an insect that eats itself.

Unfortunately, 2015 was one of the wettest years on record in Oklahoma.  I am writing this on December 27, 2015, and as of this date, the National Weather Service in Oklahoma City has recorded almost 56 inches of rain for the year.  That is a lot of rain.  It is raining as I type this sentence.

So we had a lot of rain in April, but we were able to manage a little sunshine.  Following is a photo-essay of our travels that week in April, in which we loaded ourselves and my dog Bear (aka Mighty Dog) into my Jeep and headed out in search of trains.
Dale also wanted to spend time on the BNSF Avard Subdivision.  Although this is not a short line, the Avard Subdivision was for years a lonely branch line of the Frisco.  In the past several years, it has become a major east-west corridor for the BNSF.  In 2013-2014, the subdivision was converted to Centralized Traffic Control and now, on a busy day, sees about one train per hour.


The largest portion of our trip was devoted to the Kansas City Southern, one of my favorite railroads.  While not a short line, the KCS is certainly eccentric enough for Dale's tastes.  Also, the KCS runs through the Ouachita Mountains of southeastern Oklahoma, including the village of Page, for which my son is named.
Page sits at the base of the eastward climb to the summit at Rich Mountain in Arkansas.  I have spent many years chasing coal trains up this grade.  Until the early 1990's, the right-of-way along the tracks was kept reasonably clear of foliage.  But in the twenty-first century, the KCS removed all telephone lines.  Thus, the necessity for clearing the right-of-way disappeared.  Today, most of the shots available last century have vanished behind trees that appear to grow about one foot per week.  There are still good shots on the climb to Rich Mountain, but like trains in Colorado, they grow fewer and fewer every year 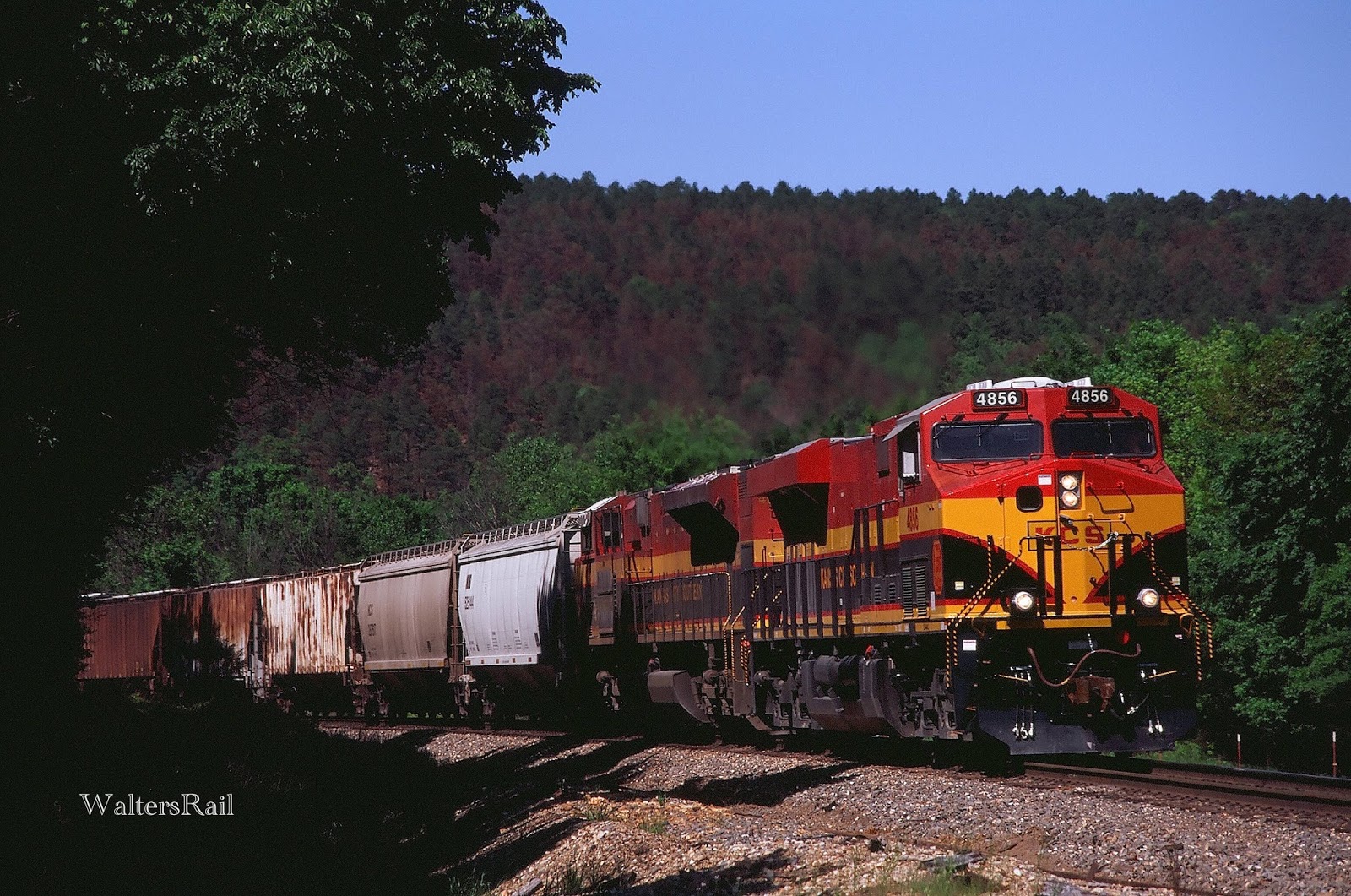 Dale and I also attempted shots north of Spiro at the KCS bridge over the Arkansas River.  There were two problems.  (1)  The sky was solid overcast with hints of rain.  (2)  Because of all the previous rain, the dirt roads into the bridge on both sides of the river were filled with mud-traps.

Fortunately, my Jeep Rubicon is designed to handle extreme mud, so we had no problems.  But we saw no trains.

In June of 2015, I returned to the bridge and took the following images.  In the intervening months, rain had continued to fall, and the roads had become even more mud-soaked.  I did not get stuck at the Arkansas River, but I managed to strand my Jeep in a mud bog along the Verdigris River near Muskogee, trying to photograph UP's Okay Bridge.  Were I more experienced, I would have taken a different approach in the mud that snared me, but I was not, and I got stuck.  It will not happen again.  I will not reveal how much it cost to get my Jeep free, but I will tell you that the only way the towing company could get to me was with a tractor, and the tractor just barely made it.  If I hadn't been near the highway with cell phone coverage, I might still be in the mud.


While were were in southeastern Oklahoma, Dale, Mighty Dog and I stumbled on a little known operation of the Kansas and Oklahoma Railroad -- a former KCS branch line from Heavener, Oklahoma, to Waldron, Arkansas.  We had no information about this line at all -- no idea if trains were running or not.  We did not even know what railroad owned the line, but on a whim we decided to follow the tracks east out of Heavener.

Must to our surprise, before we reached the Arkansas border, we discovered an eastbound freight.  The conductor of the train was following the movement in a pick-up.  He would drive ahead to each grade crossing, then wait for the manifest (moving about 10 mph) to catch up.  Dale and I took a number of shots, then headed back to Heavener.  This was probably the most pleasant surprise of the trip.

Our final goal of the trip was to capture a shot of the Austin, Todd and Ladd Railroad -- named for the grandsons of the owner of the company.  This is a true short line covering about 40 miles in west central Oklahoma, running from El Reno (and a connection with the old Rock Island yard, now the UP) west to Geary, then north to Watonga.  About the only time you will see any traffic on this line is during wheat harvest in June.  We were fortunate enough to catch a train just west of Calumet -- three engines and one car dead on the mainline.  I don't know how long the train had been there, and I don't know how long it remained.  When we drove through in the morning, the sky was overcast after a heavy rain.  But when we came back late in the afternoon, the skies had cleared, and I took the following image.

So 2015 was a very wet year.  As I mentioned above, when I started this post, it was raining.  I said to myself, "I wish it would stop raining."  Shortly thereafter, it started sleeting.  There are now about three inches of sleet on the ground.  Be careful what you wish for.

To see my photographs on Flickr, go to https://www.flickr.com/photos/jpwalters/.
Posted by Paul Walters at 2:33 PM