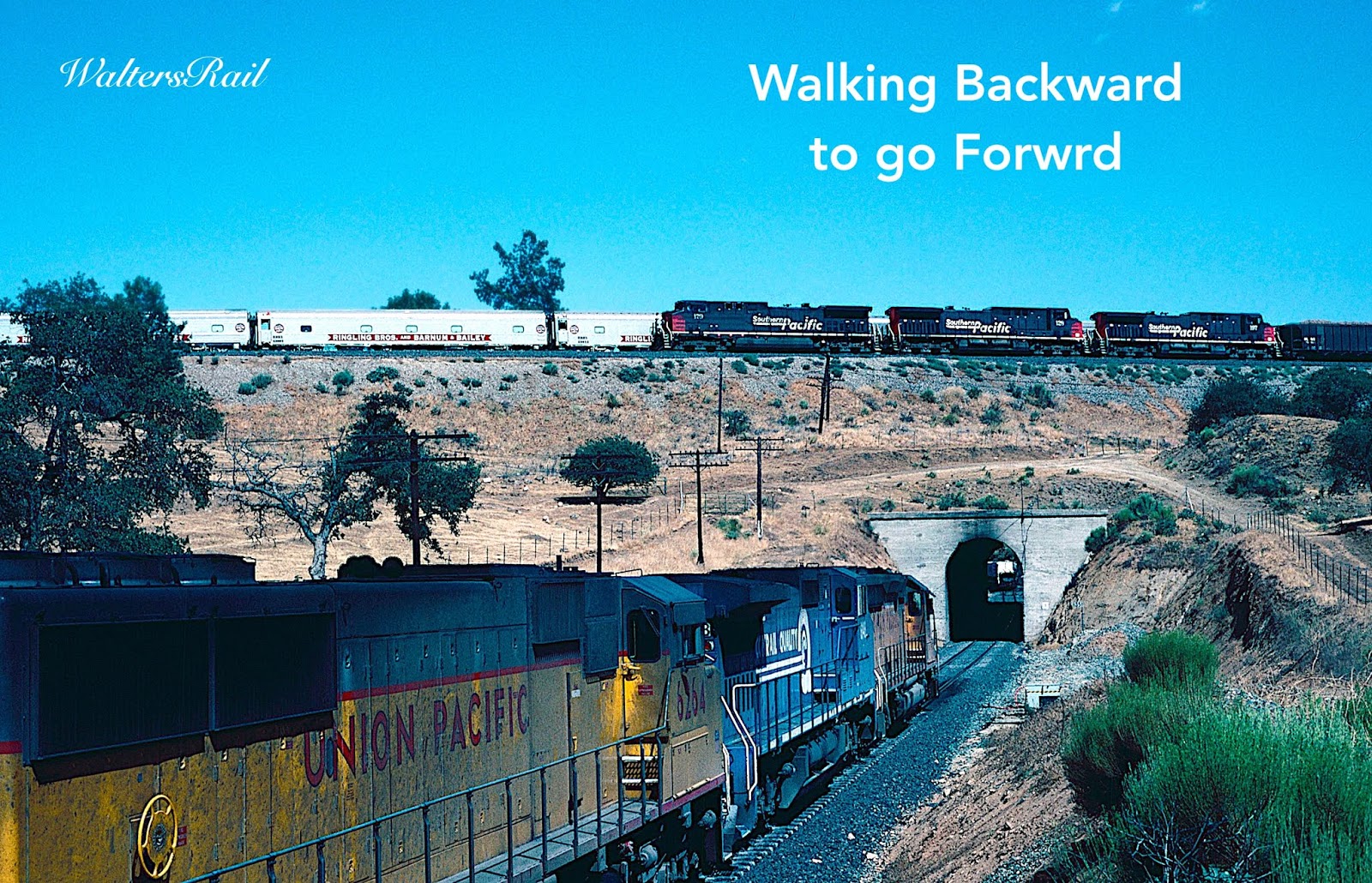 1.  This blog is about railroads, yet this is not a traditional railroad article.  Many railfans (most? all?) will find what follows either silly, pointless or repugnant, perhaps all three.  If only one person reads to the end, I will be pleased.  If none does, I will be unbowed.

2.  One of the  most influential philosophers of the twentieth century, Ludwig Wittgenstein, wrote in numbered aphorisms.

3.  Wittgenstein:  "I don't know why we are here, but I'm pretty sure that it is not in order to enjoy ourselves."

4.  Wittgenstein:  "A nothing will serve just as well as a something about which nothing could be said." 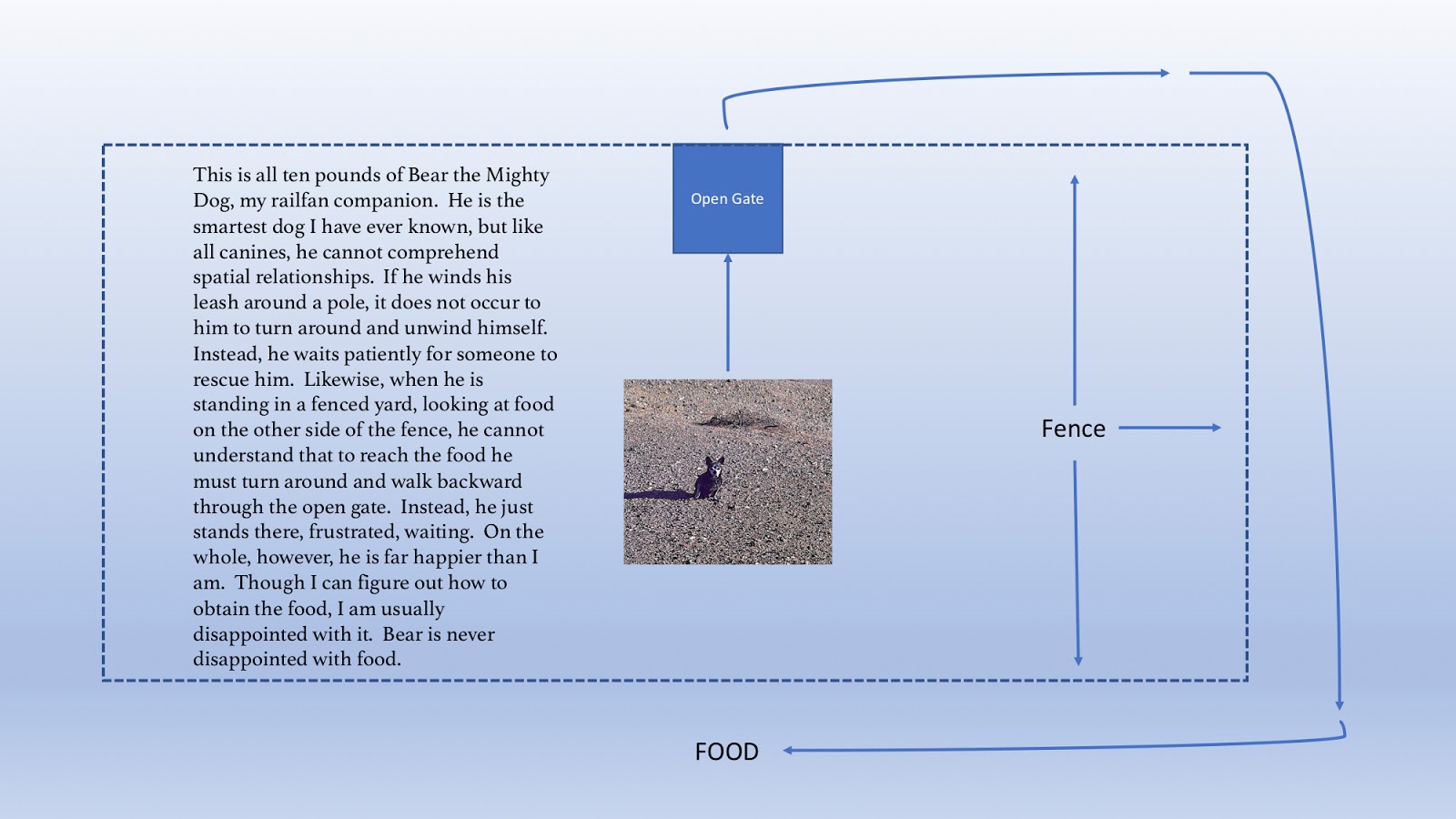 6.  The mathematician and philosopher Gotlob Frege spent a goodly portion of his professional life trying to establish a logical system from first premises that was complete and non-contradictory.  He believed he had achieved his goal.

7.  Bertrand Russell pointed out a paradox that undermined Frege's system.

8.  Russell's Paradox:  Consider the set of all sets that do not contain themselves.  Should the set include itself?  If so, then it is contradictory.  If not, then it is incomplete.

9.  Wittgenstein believed that he had solved Russell's Paradox.  In his Tractitus Logico-Philosophicus, he stated:


"A function cannot be its own argument, because the functional sign already contains the prototype of its own argument and it cannot contain itself.  If, for example, we suppose that the function F(fx) could be its own argument, then there would be a proposition F(F(fx))”, and in this the outer function F and the inner function F must have different meanings; for the inner has the form φ(f x), the outer the form ψ(φ(f x)). Common to both functions is only the letter “F”, which by itself signifies nothing.  This is at once clear, if instead of “F(F(u))” we write “(∃φ) : F(φu) . φu = Fu”.  Herewith Russell’s paradox vanishes."


10.  Wittgenstein's argument can be expressed in everyday language:  I designate this bowl for cookies only; therefore, you cannot put another bowl in this bowl.

11.  This is the same approach used by Russell and Whitehead in their formal mathematical system Principia Mathematica to solve the paradox:  "Whatever involves all of a collection must not be involved in the collection."

12.  In other words, Russell and Whitehead (as well as Wittgenstein)"solved" the paradox by prohibiting it.

13.  This does not "solve" anything.  It is like "solving" cancer by prohibiting it.

15.  The First Incompleteness Theorem:  Any sufficiently powerful formal system (such as Principia Mathematica) that claims to derive only consistent statements can generate at least one paradoxical statement.

19.  Each symbol is then separated by zero.

21.  This coding is called a Godel Number.

22.  Each formula within a formal system will have a separate Godel Number.

23.  Assume formula F(y) = (n not GF), where F is a specific formula in the formal system, y is a free variable,  G stands for Godel Number, GF means that formula F uses its own Godel Number as its procedure, and n stands for a natural number.  In plain English, this translates: "Formula F(y), as derived, shows that no natural number corresponds to the Gödel number of F(G(F))."

27.  Because we have already shown that (n not G(F)) is false, we now have a self-referential statement that says F(G(F)) is false.

29.  Godel expressly stated that his theorem was the equivalent of the Liar's Paradox.

30.   Like formal mathematical systems, life is filled with paradoxes.  There are several types:

31.  Self-Referential Loop Statements: Like Russell's and Godel's, these statements loop back upon themselves and cannot be resolved:


32.  Self-Referential, Self-Contradictory Statements:  These statements negate themselves by self-reference:


A.   "I am certain that I am uncertain about everything."  The statement is false, because you are not certain.

B.  "All I know is that I know nothing."  The statement is false, because you don't know this.


D.  "I doubt that truth exists."  The statement is false, because you don't doubt the truth that you doubt.

33:  Self-Contradictory Statements:  These statements negate themselves without self-reference:


A.  N is "the smallest number not nameable in under ten words."  The statement is false, because N is named in nine words.

B.  "X is the only movie from Director Y that is not unique."  The statement is false, because X is unique.

34.    Non-Intuitive Statements:  These statements describe actions that produce an opposite result:


A.  "For every action, there is an equal and opposite reaction."


B.  "The harder you try to untie a knot, the tighter it becomes."


E.  "The softer you speak, the more will listen."


G.  "You must make money to spend money."  ("F" and "G" together could be taken as Self-Referential Loop Statements.)


H.   "If everyone drives on the same road at the same time, no one will drive anywhere."

I.   "If you tell a child that you will give him a cookie if he will come out of the street, the child will run into the street."


35.  Self-Creation Statements:  Statements implying a condition that must create itself.

C.  "Mammals are born alive from other mammals."  How was the first mammal born?

D.  "Chickens are hatched from eggs laid by other chickens."  Where did the first chicken come from?

E.  "Words are defined by other words."  How was the first word defined?


36.  Self-Referencing, Self-Contradictory Statements can be "fixed" by segregating themselves from the self-reference.  (This type of paradox, in other words, is caused by imprecise use of language.)


A.  "I am certain that I am uncertain about everything else."

C.   "I do not make other absolute statements."


D.  "I doubt that another truth exists."


37.   Self-Contradictory Statements are also caused by imprecise use of language.  They can be "fixed" simply by admitting error.


38.  Non-Intuitive Statements are caused by the nature of the universe.  They are caused by forces that humans understand and can learn to avoid.  Therefore, they can also be "fixed."

39.   Self-Creation Statements are also caused by the nature of the universe.  Humans do not understand them, however, and can neither explain nor avoid them.

40.  Self-Referential Loop Statements are not inherent in the universe.  They are rather caused by the manner in which people think.
41.  The dog that cannot understand how to go forward past the fence by turning around and walking backward through the open gate does not perceive the following Non-Intuitive Statement:

42.  Sometimes the only way to move forward is to walk backward.

43.  Lying in the sun on a pleasant day in April, my dog is happier than I will ever be.

44:  The perception of paradoxes does not generate happiness.

45:  Godel feared that someone was trying to poison him; thus, he would eat only food prepared by his wife.  When she was hospitalized and could not cook, he refused to eat, eventually starving to death, weighing 65 pounds when he died.

46.  Hereafter follow images of trains illustrating the Non-Intuitive Paradox "going backward to move forward."  (I cannot see how trains might illustrate the other paradoxes discussed above.  If you have any ideas, I would appreciate comments.)


To see my other posts, go to waltersrail.com.  To see my photographs on Flickr, go to https://www.flickr.com/photos/jpwalters/.