When That Evening Sun Goes Down: Ellinor After Hours

No one lives in Ellinor, Kansas, though you can find it on a United States Geological Survey map.  Ellinor is where BNSF's triple track mainline running west out of Emporia, Kansas, divides;  the La Junta Subdivision continuing more or less due west to the Tall Grass Prairie Preserve and Colorado; the Emporia Subdivision turning southwest toward Oklahoma and the Texas Panhandle.  Other than Cajon Pass, this may be the busiest section on BNSF's Transcon, which is why it is called The Saffordville Chute.  (Saffordville is a virtual ghost town just east of Ellinor.) 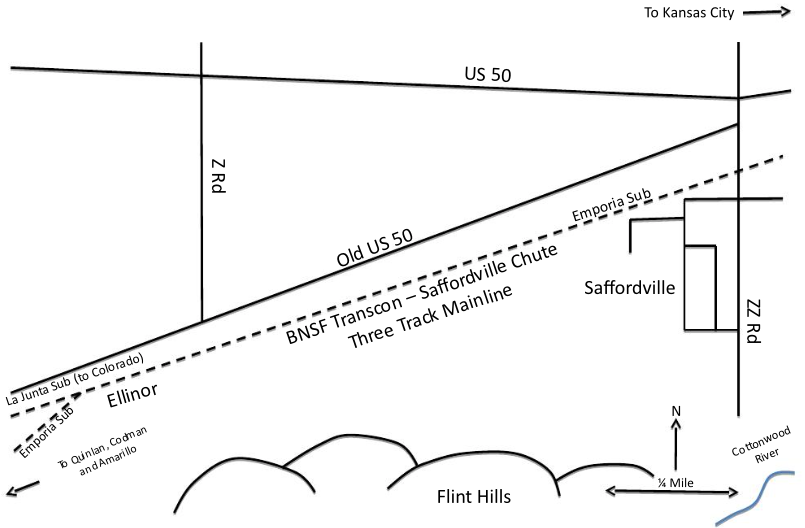 Everything on the BNSF Kansas Transcon goes through Ellinor, unlike stretches to the east and west.  To the west, traffic is diluted, with the Emporia Sub getting 60-70 percent, and the La Junta Sub carrying the remaining 30-40 percent.  During the weekend of March 8 and 9, 2014, for example, 107 trains ran over the Emporia Sub, while 50 traversed the La Junta Sub. To the east, the Topeka Sub (the original AT&SF mainline) branches off at NR Junction on the east side of Emporia.  On the double-track mainline between NR Junction and Holliday (near Kansas City), a derailment, track work or heavy freight volume can cause the dispatcher to fleet a significant part of the Transcon stream onto the single-track Topeka Sub, relieving pressure on the parallel Emporia Sub.  With very few exceptions, however, all Kansas traffic roars through The Saffordville Chute.

Because Ellinor sits in the Cottonwood River valley, the dark black soil feels flat, the terrain unbroken.  A short drive north or south, however, reveals the prevailing landscape – long, unmolested Flint Hills, where solitude and silence are virtues, where the sound of approaching trains is muted only by wind through bluestem grass.  Perhaps Abraham Lincoln was thinking of the Flint Hills when he said, "If I went West, I think I would go to Kansas." 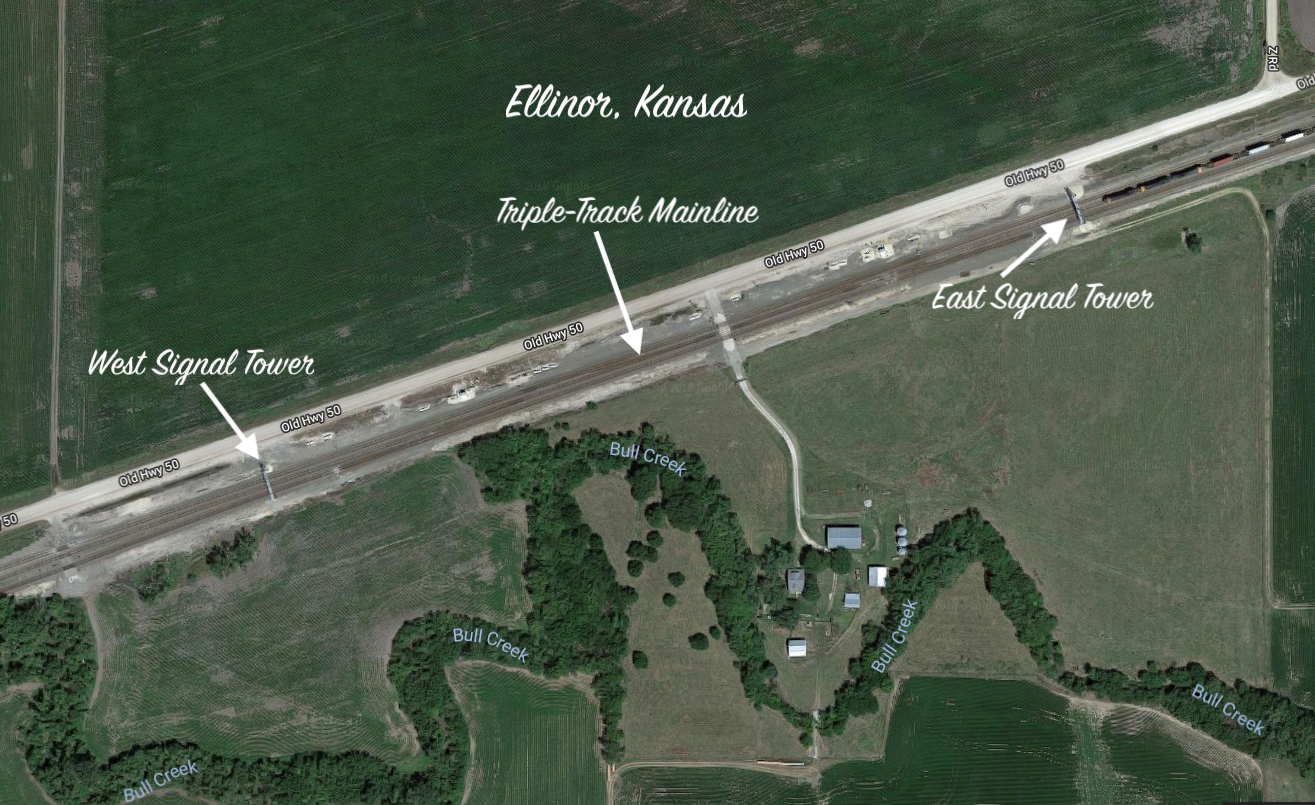 I practice law in Edmond, Oklahoma, and my wife is an Associate Professor of Management at the University of Oklahoma.  Several years ago, however, she taught at Emporia State University, and we owned two houses -- one in Edmond, one in Emporia.

I would spend every other week at the house in Emporia, where I maintained a one-room office to service my telecommunications clients, all of whom are located out-of-state.  Emporia is a small, university town of about 15,000, very similar in size to the place where I grew up -- Chickasha, Oklahoma.  Emporia, however, is a Northern city, while Chickasha is Southern.  Emporia was settled by people from places like Illinois and Ohio, while Chickasha was originally part of the Chickasaw Nation, one of the five Civilized Tribes, and was settled by a mixture of Chickasaws, their African slaves and Southerners, mostly from Mississippi and Louisiana.

So the differences are significant.
Another major difference is that Emporia is located on BNSF's Transcon.  If you live there and enjoy watching or photographing railroads, a short, ten minute drive will take you to Ellinor, where in an hour or so you can sometimes see as many as 10 trains.  Even on a slow day, you are almost certain to see two or three trains every hour.

Many a day after work, I would drive to Ellinor to watch and photograph the parade of BNSF intermodal traffic.  I would arrive close to sundown, and I soon discovered that, because of the traffic frequency, and the east-west direction of the tracks, I would often see a train in the short time, about fifteen minutes, when the sun hangs orange-red on the horizon, then drops suddenly, darkening the landscape as though a curtain has been closed.

I began to seek such shots and offer the best in this post.

One of the best locations for photography at Ellinor is the west signal tower.  Many years ago, this area was guarded by old AT&SF target signals, all of which were replaced in the 21st century by two shiny new towers (east and west) that have become landmarks along old U.S. Highway 50, probably the least travelled transcontinental route across the United States.  The road starts in Ocean City, Maryland, passes the White House in Washington, D.C., then crosses Virginia, Ohio, Indiana, Illinois, Missouri, Kansas, runs beside the Royal Gorge in Colorado and Placerville in California, eventually terminating at the Embarcadero in San Francisco.

If you drive the route from Maryland to California, you will recognize that you have entered the American West when you reach the Flint Hills at Ellinor -- because as you drive up out of the Cottonwood River valley, you will see mildly undulating grass-covered hills without a tree in sight.  The grasslands stretch as far as the horizon.  If you have never experienced this before, you will almost certainly feel disoriented, especially if you have lived your life in woodlands.  You are now in a country of emptiness, nothingness, where the sky stretches from horizon to horizon, and you begin to grasp the smallness and insignificance of people and their worries.

"As to scenery (giving my own thought and feeling), while I know the standard claim is that Yosemite, Niagara Falls, the Upper Yellowstone, and the like afford the greatest natural shows, I am not so sure but the prairies and plains, while less stunning at first sight, last longer, fill the esthetic sense fuller, precede all the rest, and make North America's characteristic landscape."  -- Walt Whitman.

Each evening the sun drops behind the hills west of Ellinor, and many evenings a BNSF freight will come blasting beneath the west signal tower either just before or just after the sun has gone.  The following images were taken in that location and brief window of time.

The East Signal Tower looks back toward Emporia, Kansas City and the great deciduous forests of the east.  Unlike the surrounding Flint Hills, the valley of the Cottonwood River is heavily forested, and every ten years or so, the railroad must cut back the timber to keep it from encroaching on the right-of-way.

East of Ellinor, the triple-track mainline is divided.  Two tracks run at ground level, while a third track to the south is built on a embankment about twelve feet tall.  This unique arrangement was brought about by the Great Flood of 1951. 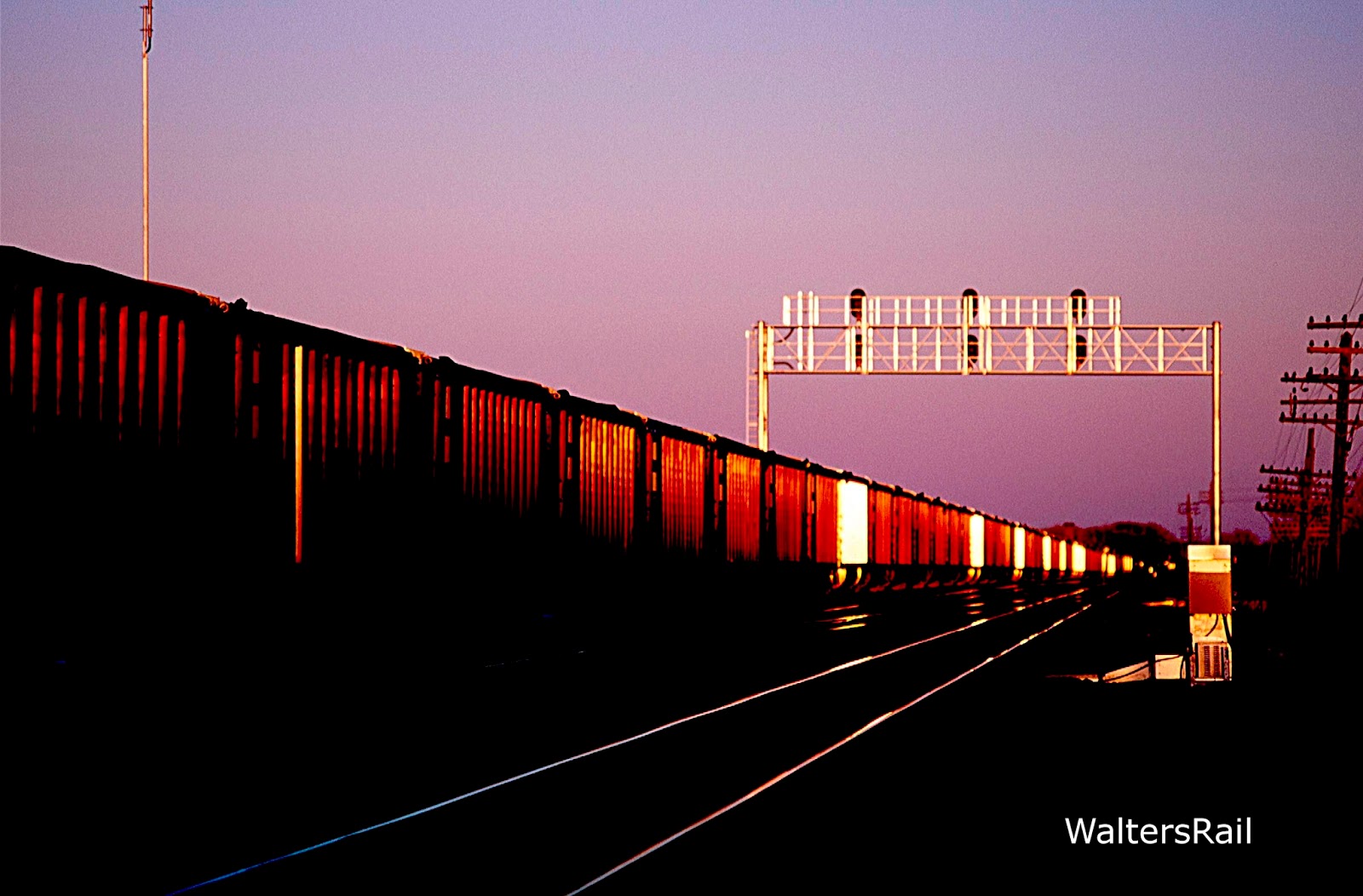 On July 8th and 9th, 1951, over nine inches of rain fell, and the Cottonwood River rose more than ten feet in two days. The headline on the July 11, 1951, issue of the Chase County Leader read, “Worst Flood In All History Hits Tuesday.”

The newspaper reported that in Saffordville “buildings of every nature [were] deposited in the most improbable places,” and that “buildings [were] lurching like drunken men against each other.”  Residents reported water heights of up to 51 inches in their houses.  Some had to climb onto roofs and wait to be rescued by rowboats.

Eventually, over a period of many years, almost every house in Saffordville was moved to higher ground.  The houses were lifted off their foundations, placed on wheels and rolled into the surrounding Flint Hills.  Today, virtually every house in those hills within ten miles was originally located in Saffordville.
Saffordville is marked by a small sign on a two-lane road (old U.S. 50) and contains an abandoned school maintained by county residents as a community center.   Once or twice a year, the building is opened for social gatherings.

Along the tracks stands an abandoned grain storage facility with a profanity scribbled beneath the name of the grain company.  The depot, like the houses in the town, was moved offsite and used by a local farmer as a storage building until burning to the ground in the 1990’s.  Whenever I would stop my car to watch trains, several apparently wild but friendly dogs would wander over and inspect me and my vehicle.

As mentioned, the three-track BNSF mainline is notable because main three is built on a much higher grade, an acknowledgement by the Atchison, Topeka and Santa Fe that recurrent flooding required the significant raising of at least one line to keep trains moving.

From Saffordville to Ellinor, BNSF has recently removed telephone poles, wires, brush and trees.  Photographic opportunities are now available that haven’t existed for many years and soon will become overgrown.  But right now, the right-of-way from Saffordville to Ellinor is as open as the Kansas sky.
Saffordville was founded in 1872 as Safford, shortly after the Atchison, Topeka & Santa Fe built through the area.  By the end of 1872, it had a post office, a depot and a store, and by 1901 a creamery, hotel, and at least twenty houses.  By 1887, mail was being sent to the town addressed for Stafford, Kansas (northwest of Wichita), so in that year the town's name was changed to Kenyon.  Then, mail began arriving addressed for Cañon City, Colorado, so in 1888, the name was very briefly changed back to Safford before becoming Saffordville after a group of railroad workers painted "Saffordville" on the train depot.

In May of 1951, two months before the Great Flood, the high school graduated four students.

The land surrounding Ellinor is part of the huge Palenske Ranch, which covers thousands of acres in the bottomland of the Cottonwood River.  The ranch is so big that it operates two grain elevators to provide feed for the livestock.  In high summer, when the sun sets well north of due west, the southernmost elevator makes a nice background for images of trains in the dusk.  Occasionally, it is possible to photograph a train with both elevators.
The Parade of Westbounds

On Saturday afternoons, four to six westbounds may roll by in 90 minutes or less.  Slower movements such as coal (bound for Oklahoma Gas and Electric’s Red Rock Generating Station in Oklahoma) and grain are sometimes located in the middle of the fleet and will pause at Ellinor while higher priority Z and Q trains run around on the dash to Texas and California.

Because of the high traffic frequency, a scanner is unnecessary for finding trains.  Radio transmissions, however, are frequent – most on AAR Channel 36.  Trains waiting at the junction will often call the dispatcher to determine the length of the wait.  Dispatching this section of the BNSF must be among the most hectic jobs in the country, especially when welders, signal maintainers and track inspectors are about.  A train crew’s request for location of other trains will often elicit a curt reply, such as, “Meeting three,” or “Have to get back to you.”

Some of the most entertaining radio traffic involves calls to “Forth Worth Mechanical,” usually from a hotshot intermodal with a unit that isn’t loading.  The exchange between crew and Forth Worth almost always ends inconclusively, after various toggle switches are thrown and computers re-booted, making you wonder if the train actually arrived anywhere.

The people here are some of the friendliest in the country.  When they see that you are taking photographs, some will stop to chat.  Almost everyone will have a story about the railroad, or Ellinor, or Saffordville or the many floods through the years, and all will be proud that you think their home is picturesque enough to photograph.

I leave you with four images that, for me at least, capture the heart of this place.  If you've read this far, you will understand that no captions are necessary. 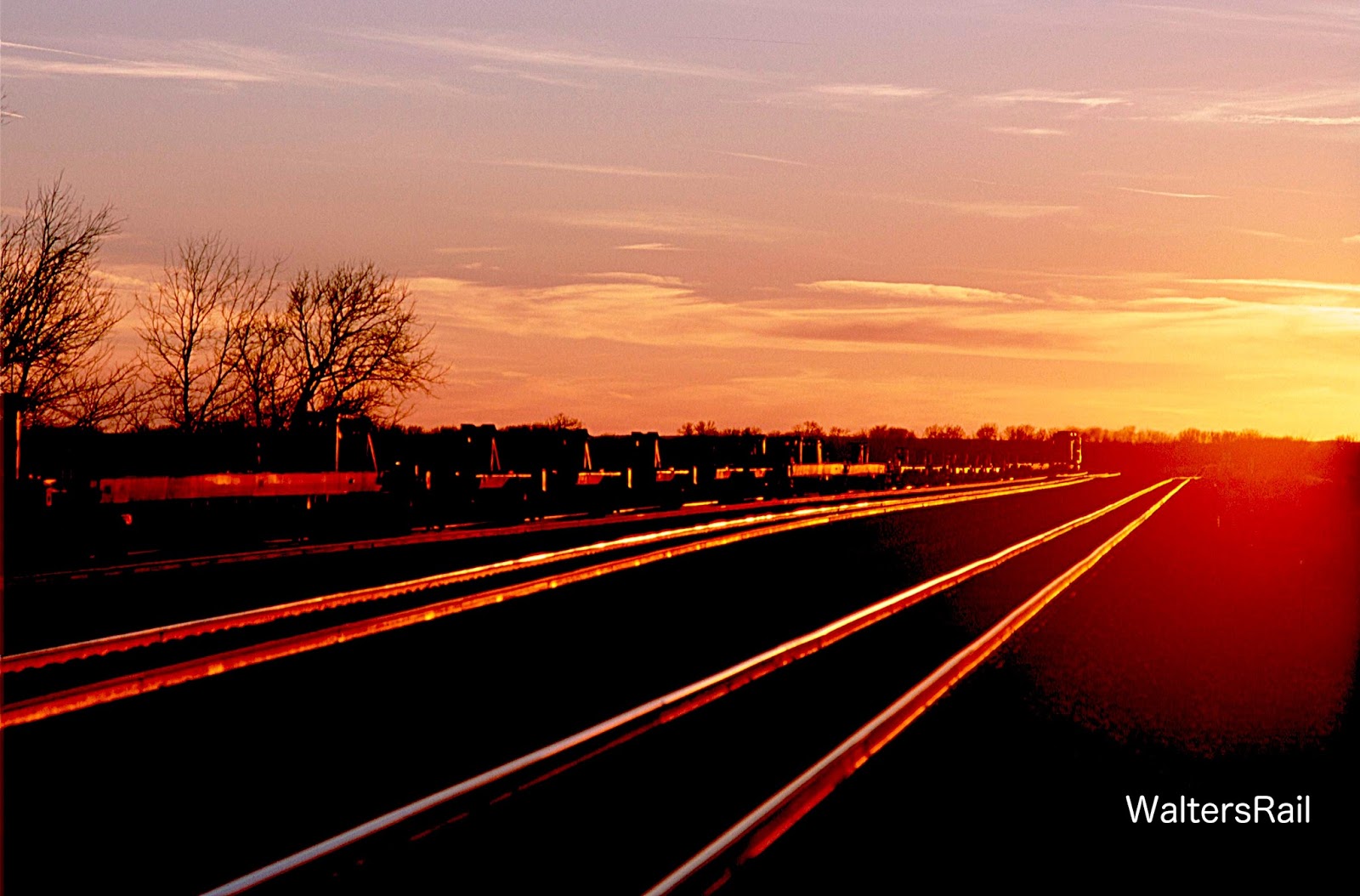 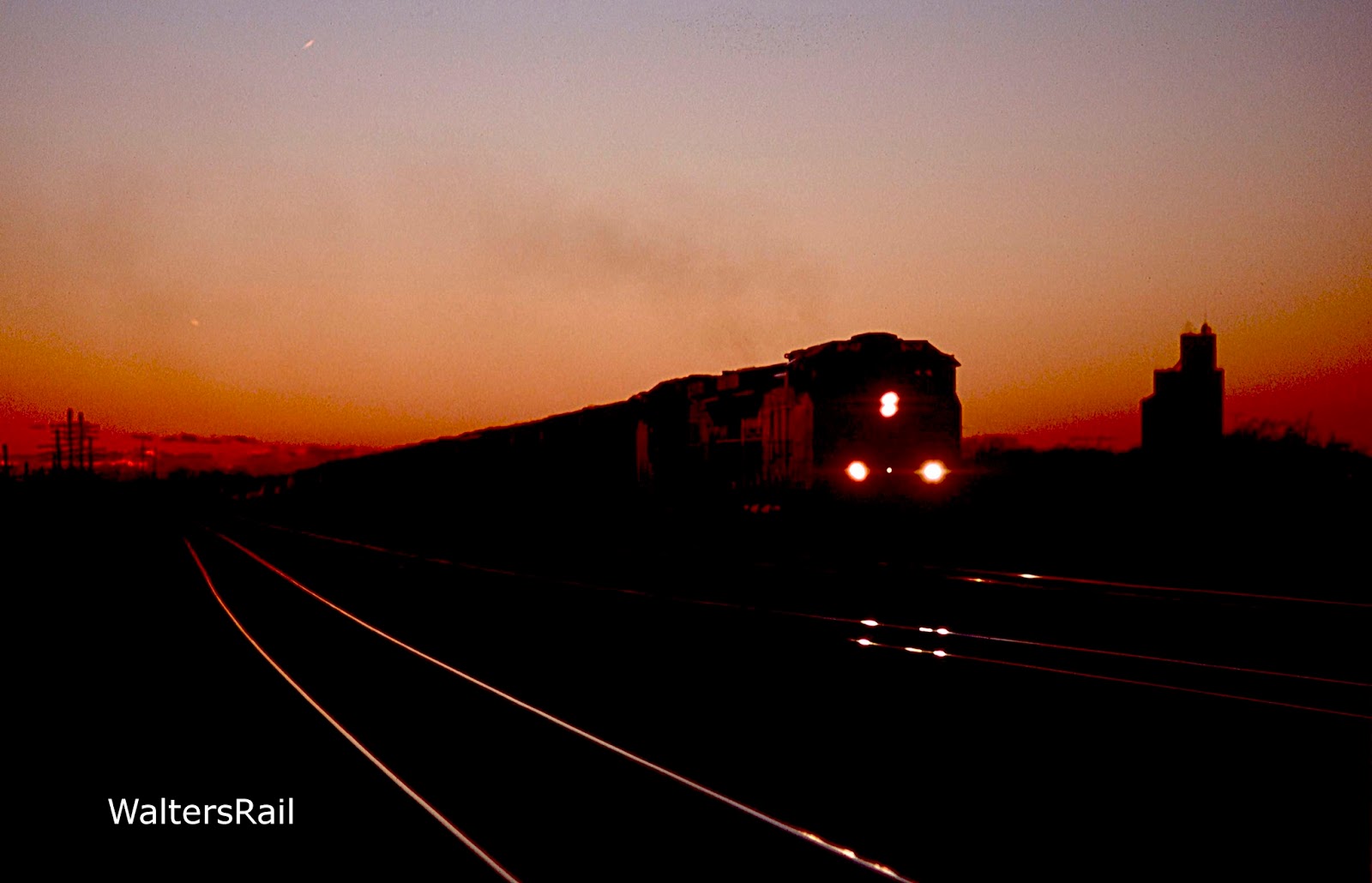 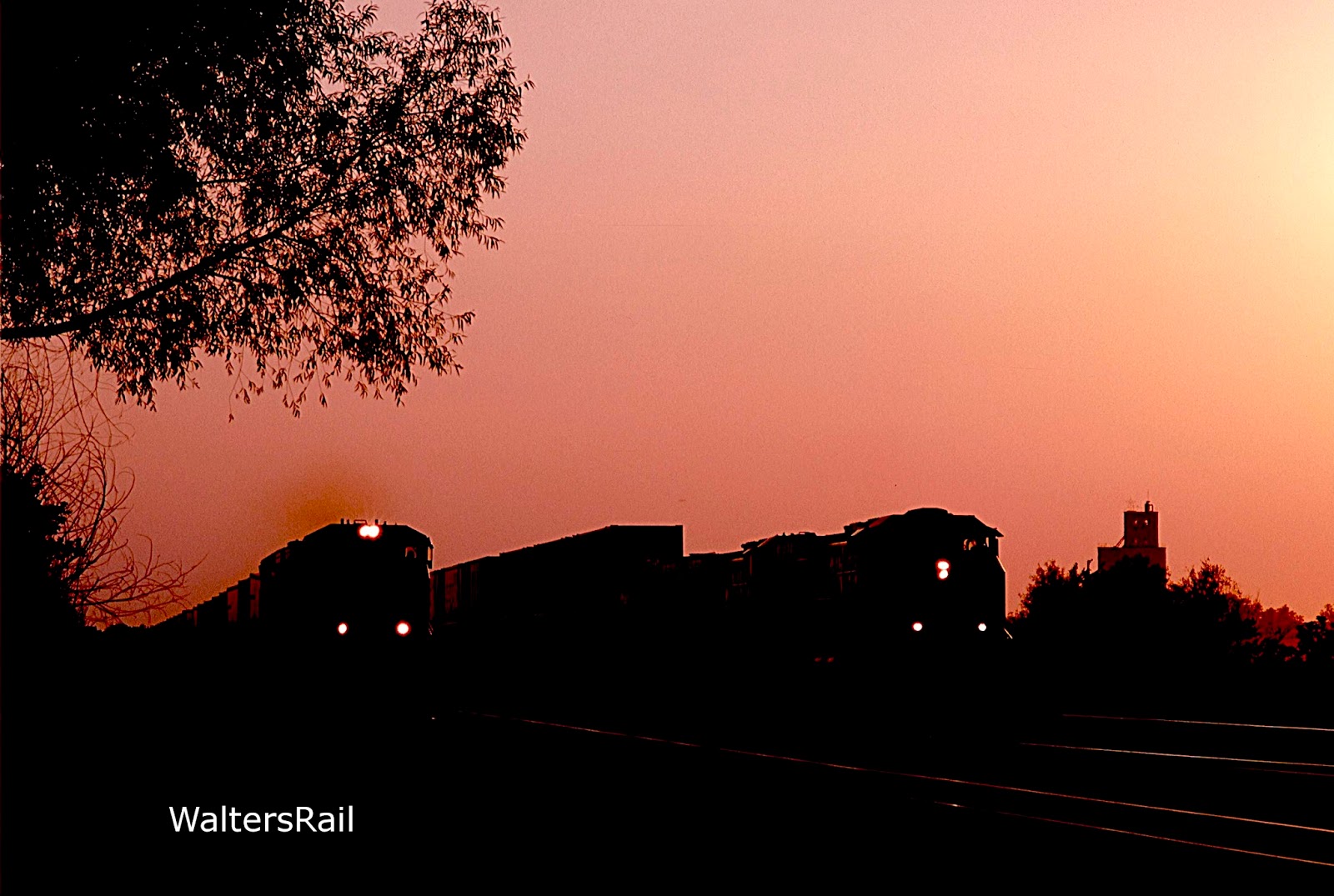 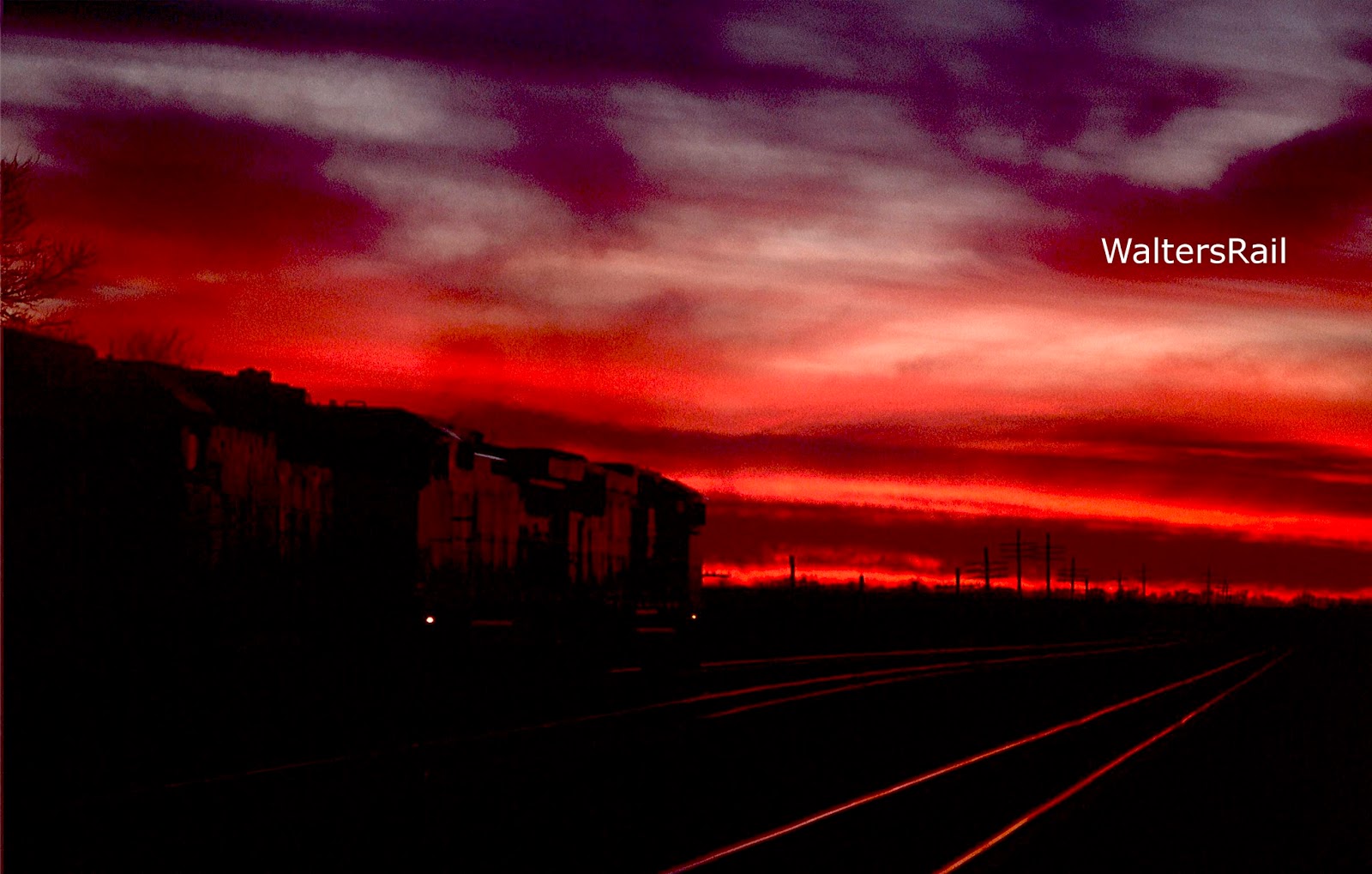 To see my other posts, go to waltersrail.com.
To see my photographs on Flickr, go to https://www.flickr.com/photos/jpwalters/.